Having been raised in the Bronx, New York City, had a lifelong impact upon my senses and emotions. These are not actual places but rather childhood memories and impressions bubbling to the surface. All of these works are created using palette knives only, the colors are chosen randomly which is a healthy challenge. The works are named in the order in which they were created.

Summer haze on a view downtown, looking south from my grandparent’s balcony. A memory of summer days and bright skies.
8″x20″ oil on linen
N/A

Weather darkens the sky, as the storm approaches, the colors darken block by block.
12″x30″ oil on linen
N/A

A hot night downtown, lit from below. Colors dominating the spaces between buildings.
8″x24″ oil on linen
$300.00 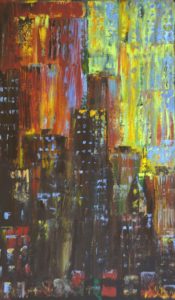 Waiting on the steps of a building, waiting for a relative to come by. The smell of stone and cement in the morning air, watching the sunrise catch the upper stories.
12″x20″ oil on linen
$400.00 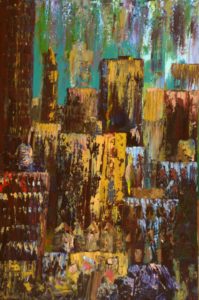 Out the window of a major hospital, back streets all clustered together as if seeking comfort from numbers.
16″x24″ oil on linen
$600.00 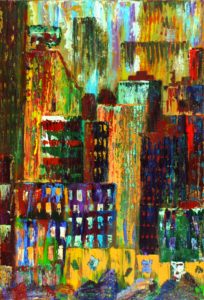 Even the worst neighborhoods have the most incredible beauties, if you take the time
to see them.
18″x26″ oil on linen
N/A

Hearth and home, apartments and families making each building its own village.
14″x30″ oil on linen
$700.00 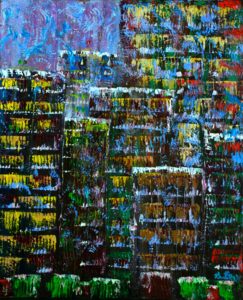 Winter time in the snow, holiday lights in all the windows. Watching the snowfall stalk you across the avenues.
20″x24″ oil on linen
$800.00